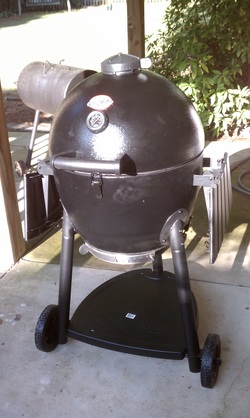 So as a backyard bbq stud, I am always on the lookout for a different way to do things.  Over the last year or so I had been dreaming of a new smoker.  A Lang 80, Stumps or Superior gravity feed, one of the classics.  Not having the kind of need for that volume I could not justify those purchases.

Well, late this spring I had a member of our church ask if I would do a fundraiser for him.  He was going on a missions trip and thought it would be a great way to raise money for the trip.  I thought to myself...self...here is your chance to increase your customer base and do some good at the same time (I already sell my bbq to a small list of a dozen or so people I am friends with and go to church with).

I setup a great Weebly site for the fundraiser which was super easy and allowed orders to be tracked.  Shortly after the site was up and the guy going on the missions trip started promoting it on Facebook and I sent out emails to my list, it became clear my little Brinkmann in the background was not going to hold enough.  I had talked with my brother-in-law, who works for Char-griller, about this new Green Egg knock off they had for under $300.  Being high on skepticism yet low on funds, I high tailed it over to Lowes and checked it out.

The one that was put together was about what I was expecting.  Light weight steel and plastic wheels were what immediately jumped out at me.  I knew they had gone the route of using insulation between lighter steel walls to control heat so I was not too concerned with the weight.  When I opened it up I was actually quite surprised though.  Cast iron grate with a metal rack that mounts over the cast iron grate that holds additional food.  The controls seemed to be solid and I noticed the top vent was designed to stay in place when the lid was opened, something that bugs my neighbor who has a Green Egg and slides all the way open if he lifts the lid during cooking.

I read the reviews online which were mostly good and decided to give this a shot (it was that or cook for three days straight on my older smoker).  I grabbed a weber round grate to hold an old pizza stone that I had to use as a diffuser.  When home, I realized the top lid had been crushed in shipping at some point and was oval and not round (irritated).  After a quick trip back to Lowes for and exchange, I was able to put the unit together with no trouble in about an hour.  Unit was solid so I decided to fire it up.  Like most other reviews point out, the temperature gauge is waaaaaaaaaay off.  Using a digital probe I found that it was about 50 degrees off from what the supplied gauge said.  This did not bug me because my other smoker was always off by 20 or so degrees.

The big day to cook came and I had cut up some hickory wood that I used into small pieces and mixed it in with charcoal at about a 50-50 ratio.  I am a big fan of smoke flavor.  In my opinion if you can't taste the smoke why not just use charcoal.  Anywho, I added the starter charcoal from a chimney and loaded just over 40 pounds into this little R2-D2 looking smoker.  Five butts in total, three on the lower grate and two on the top.  Closed the lid, and with the help of my digital thermometer, bot the temperature to just over 225 degrees.

I have to admit, I was very paranoid about this smoker because I had built a reputation in my little world for having great BBQ and was not sure if this would end my reign as Backyard BBQ Stud or not.  I checked it about every hour and to my delight, I made no adjustments for the first four hours and only a couple of minor ones after that.  I think my biggest issue was using briquettes I had instead of buying lump charcoal.  The ashes were thicker  and I had to give it a little jiggle to clear out the ashes and get the airflow back to normal.

The Akorn finished all forty pounds in 8 hours, which was 6 to 7 hours ahead of my Brinkmann which I started at the same time to handle the additional meat that would not fit in the Char-griller.  The meat was wonderful.  Juicy, smoke filled and perfect for pulling.  When delivered I received numerous emails from folks that had ordered for the first time giving high praise and asking to let them know when I cooked again.  That will swell a studs ego, let me tell you.

So to sum up my first smoker review, let me say this, no damage was done to my ever expanding reputation as a BBQ Stud, I added a couple of new customers, and got a great little smoker for under $300.  If you are looking to add something like a Green Egg or Primo, you might want to consider giving the Char-griller Akorn a look.  It is not as fancy as a Green Egg and it sure won't help you look like you are keeping up with the Jones' but hey, this is Backyard not Hollywood.  Camo's, cutoffs, flip flops and pickups rule here, and the Akorn fits in just fine.
The BBQ Times Newspaper

The Smoke Ring- All you need to know about barbecue